Some parts of this website will not work with Internet Explorer.

Please use a different browser such as Chrome or Firefox.

Evening at the Falls 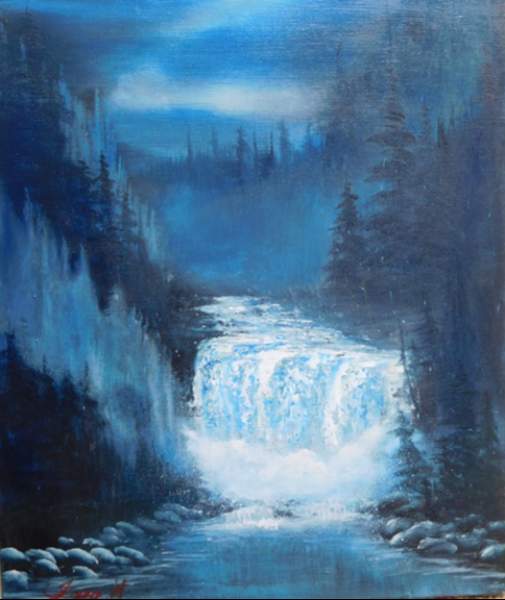 This work has been painted over 10 years ago and has faded in color. I do not like dark paintings very much, but this is an exceptional work that I like very much.

The atmosphere here is amazing!
I love dark blue colors in general. This is amazing how many variations of blue is here and yet there is incredible depth here!

Did you use glossy varnish to cover the painting? This will bring colors back.
I use spray and do two layers as per the instructions on the can as I am afraid to do it with brush.

Also I know that varnish I use (acrylic-styrol) will be difficult to remove in case restoration will be needed. But I think beginners works don't need to be restored. I think when I feel confident enough I switch to linen canvas and other type of varnish. But it'll certainly remain glossy varnish.

Dear Sunnylady
Thank you for your kind comment.
This work was originally painted in only three colors (Prussian Blue, Midnight Black, and Titanium White). I tried using a tableaux last year, but there was not much color return. So I added a little phthalo blue before uploading.
By the way ,can you tell me wonderful landscapes in Russia?

Jin, there is Baikal lake and Olkhon island inside that are truly amazing. No high mountains though...

Mountains and volcanoes will be at Kamchatka region but I don't know if you can find good quality photos as it is wild nature is there and very few tourists. "The Kamchatka Peninsula is a 1,250 kilometres long peninsula in the Russian Far East, with an area of about 270,000 km². The Pacific Ocean and the Sea of Okhotsk make up the peninsula's eastern and western coastlines, respectively."

"Mount Elbrus is a dormant volcano in the Caucasus Mountains in Southern Russia, near the border Russia shares with Georgia. It is the highest mountain in Europe. It is also the tenth-most prominent peak in the world. Elbrus has two summits, both of which are dormant volcanic domes."

Also there are mountains in Buryatia region, they are quite impressive as well. "Buryatia is a mountainous Russian republic in eastern Siberia. A stop on the Trans-Siberian Railway, Asian-influenced capital Ulan-Ude is home to Russian Orthodox Odigitrievsky Cathedral and a giant Lenin sculpture. On the republic's western border lies massive Lake Baikal."

And another very beutiful place is here: "Valaam (Russian: Валаам or Валаамский архипелаг), also known historically by the Finnish name Valamo, is an archipelago in the northern portion of Lake Ladoga, lying within the Republic of Karelia, Russian Federation"

Jin, can you tell more what tableaux is?
This is an example of varnish i was talking about: https://www.winsornewton.com/row/shop/oils-solvents-mediums-and-varnishes/oil-colour/varnishes/artists-gloss-varnish-5-07-us-fl-oz-150ml-can-3034982

Thak you very much ,Sunnylady.
I think Tableaux is a glossy vanish .
Here in Japan we say it tableaux(french).
I think japanese paint maker named tableau for its products.
Tableaux

I see. Thanks a lot!

A very beautiful painting with lots of layering and depth. I love a good misty painting, and your waterfall and stones are lovely. Well done.

Not a member yet?
Join over 2000 other painters and share your paintings with the world!

More Versions of Evening at the Falls

Blackjuniper
2
Evening at the Falls

Artbycharlie
2
Evening at the Falls

BStonebridge
0
Evening at the Falls

N Kav
4
Evening at the Falls